Where Is It Coming From

Cordyceps Sinensis mushroom is a new pharmaceutical mushroom that has been evolved, developed and mutated. It is probably the single most important food development in the 21st century. This mushroom was discovered several centuries ago on the Himalayan Alps in Tibet, where it was growing at 14.000 feet and higher. It is only found at this high altitude because it is such a rare find mushroom it required a DNA from dead insects to acquire the oxygen it requires to survive at these altitudes.

As such it has now been discovered that cordyceps sinensis which is basically a traditional chinese mushroom is helpful with such problems as low energy, it’s about oxygen being delivered in cellular level, it fights against coughs, turbeculosis and lower back pain. These are all various areas that found through clinical studies. Its growth pattern in the wild is that it will attach itself to dead insects to obtain the DNA for oxygen. Basically, what happens in the mushroom itself is it creates what is called a polysaccharide, a very large oxygen based sugar molecule that has perhaps maybe as many as 100 oxygen molecules in it. As the sugar is broken down the oxygen is released on a cellular level and hence you have a regulation of bloggd sugar swings and the elimination of cancer which cannot exist in an oxygen-rich environment.

What Is It That Differenciates It From Other Mushrooms

The Cordyceps is a symbiant rather than a parasite and boosts the immune system of its known host. Actually it doesn’t live in anything living, it only attaches itself to the dead insects or skeletons of insects.

Mushrooms are broken down into three categories:

1. the fruiting body which you normally would consider the mushroom cap,

2. the mycelium which is in the soil itself as fine filaments

3. and the extract or if the mushroom was grown in a growth medium that would have a type of medium mix that it grows in.

All three parts of the mushroom have different and unique chemicals each causing a blend. What we call full spectrum is when we take the fruiting body the mycelium and the extract that it was grown in and we consense them all dowen into a soup which is then dehydrated and formed into a mash. The cultivation takes place in jars, at Aloha Medicinals, south of Carson City, Nevada.

The production levels right now in this kind of production, are in excess of 250 tons per month (over a million pounds). It’s now sold not just for cancer patients but in feelots as an antibiotic substistute.

What are the common uses of cordyceps sinensis 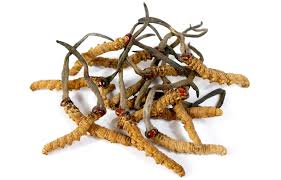 The main use of most medicinal mushrooms is to enhance immune function. Most countries use these mushrooms or mushroom derived compounds in clinical practice. This is not part of our culture here in the states. Under our regulatory system that thing has to go through pharmaceutical approval before it can be used in clinical setting. So, while we use mushroom products as dietary supplements in America, the primary use in most of the world is either in cancer or in HIV treatment. Cordyceps has antiviral compounds which are as effective or more effective than the pharmaceutical available drugs today, only they are not toxic. So, the main use for Cordyceps Sinensis is antiviral use.

– research has shown that it shrinks tumors

In more detail, Cordyceps was first brought to the media when the Chinese olympic team used it to win all its medals and was considered to be a food rather than a drug. It is a performance enhancer and is used by world class weightlifters to improve their world records. A remedy for weakness and fatigue. It increases the ATP molecule in the body. Greater quantities of ATP equals greater energy capacity. However, most of us don’t work anywhere near the limits of our ATP capacity. If you are a marathon runner then you will definitely see diference in using it. But for the average housewive or businessman ATP capacity doesn’t matter at all.

The other thing is, Cordyceps dramatically increases the absorption of oxygen. The air around us contains 20% oxygen. Humans inhale 20% and exhale 13% oxygen. It’s found that people who consume cordyceps exhale only 8% oxygen which clearly shows that their body absorb larger percentage of oxygen.

Where Can I find It?

Cordyceps costs around $30,000 per pound. It’s gold. You can’t just buy it. You can get it however, through Onnit coupons, Shroom Tech sport, along with other herbs and nutrients inside.