If you or someone you know has ever suffered from a migraine, then you know that it is far worse than your average headache. Migraines can be so severe that they cause additional symptoms, such as sensitivity to light and sound, nausea, vomiting, numbness, and several more. This condition truly impacts one’s daily life and ability to function at the workplace and within the home.

According to statistics, about 30 million people in America suffer from migraines, so if you are plagued by this condition, you are not alone. Those who may be at elevated risk of migraines are those who have a genetic history or women, especially between the ages of 25-55.

Learn about some of the ways you can take treatment into your own hands, namely through altering your nutrition. If you are a chronic sufferer, then you are probably willing to try anything to get relief, so follow some of these tips and suggestions.

Periods where you skip meals or are not properly hydrated can make you more susceptible to experiencing migraines. Therefore if you do suffer, you need to be especially mindful of what you eat and drink. There are a number of lifestyle and environmental factors that can be triggers as well, but for the purposes of this article, we will be focusing on nutrition.

Rather than lack of certain nutrients, the presence of some elements found in common foods have been determined to be triggers to migraines. To give you an idea of the scope of their effect, about 20%-50% of people have been able to reduce their migraines by eliminating certain food groups all together.

In addition, there is a number of contributing factors that alter the affects of some these trigger foods. For example the quantity that you consume plays a part as well as the combination. By combination, we mean the mixing of certain trigger foods that would otherwise not trigger a migraine on their own.

As with many other allergies, elements that contain histamines are likely to trigger a migraine reaction. Other triggers include nitrates (found in cured meats) and tyramine. Here are some of the specific foods that may contain these and other migraine triggers:

Chocolate: So sad, but it’s true that chocolate is a common trigger due to its tyramine content. The good thing is that in small doses, you may be able to dodge the trigger level, so moderation is key.

Caffeine: If you are caffeine lover, you may want to try weaning yourself off and cutting back on your habit at least. This is often another trigger, especially for those who do NOT habitually intake caffeine.

Cheese: Aged cheese, in particular is a food that contains tyramine, making it a trigger. The dairy food group as a whole, however has been associated with migraine triggers, especially certain yogurts and sour cream.

Red Wine: This, unfortunately, is another food/drink favorite that contains histamines and therefore, can be a trigger to migraines in many. It also contains an element called phenols and there has been some debate over whether these or the histamines are the real trigger. While some people are migraine sensitive to red wine, others are triggered by alcohol in general.

Processed meats: Getting rid of fried foods in general, is a good way to eliminate migraines, however even cured meat, that you may not expect to have an affect can be a trigger. This includes salami, sausages, hot dogs, etc. For this reason, try to make sure that your meats are as unprocessed and as organic as possible.

Other food triggers include food groups such as gluten and food additives like MSG.

Foods To Include In Your Diet And Prevent Migraines

Vitamin B6 is one that you may want to incorporate to see if you can alleviate your migraine symptoms. It has been shown to increase histamine tolerance through increasing levels of diamine oxidase, which is critical for migraine sufferers especially among women.

More specific foods to include in a migraine prevention diet may be watercress, fennel and even almonds. Believe it or not, fennel has been used in Aztec culture as an ancient remedy to relieve migraines. 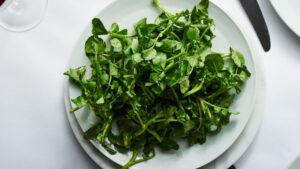 Watercress is another remedy food as it contains the important B6, which was previously noted, as well as Vitamin C, carotenes, and manganese. This refreshing green can easily be incorporated into one’s diet.

Almonds are another easily incorporated food that can address migraine frequency and severity. Studies have shown that after eating the almonds, which are prepared by soaking them in water over night, for two to three weeks, has cut down on the duration and rate of the condition.

In general, it is also a good idea not to skip meals and make sure that each meal is well balanced. These meals should include a combination of protein and small amounts of simple carbohydrates whenever possible.

Regularity of meals is important because a dip or sudden spike in blood sugar may be a trigger in itself. For this reason, maintain a regular meal schedule and blood sugar levels.

Because migraines can be so closely linked with our nutrition and internal chemistry, certain elements can be replaced by supplements and herbal remedies.

Magnesium is one nutrient that has been found to be low in migraine suffers. Upon taking a magnesium supplement, people have reported fewer migraines and one’s with shorter duration. There are always natural ways of increasing your magnesium intake through foods like spinach, legumes, whole grains etc., however you can also take the recommended 310-420 mg in supplement form.

Riboflavin is another necessary element that is part of the Vitamin B family. The recommended daily dose is about 1.2 mg per day. However, large doses of the nutrient have been found beneficial for migraine sufferers. One study, in particular, found that 400mg daily servings increased the occurrence of migraines in participants by 50% compared to a placebo.

Feverfew is the name of an herb that has been commonly used to treat migraines as well. It is said to work by directly affecting the constriction of blood vessels in the brain. Preventing these blood vessel spasms can therefore, prevent migraines.

While dealing with migraines can seem like a never-ending battle, there are some things that you can do to prevent recurring episodes. In combination with physician recommendations, incorporate some of these nutrition changes to take control over this painful condition.