50% of the American population is vitamin B12 deficient

A study conducted in Tufts University which found that 40% of the American population is deficient in B12. As the announcement says, this number is probably much greater because it’s difficult to detect B12 deficiency symptoms since there is a delay of five to six years till they show up. So, it’s difficult to detect a B12 deficiency and it’s unclear how much we actually need to have to measure that. Certain groups are at risk however.

Which Groups of People Have The Greater Risk of B12 Deficiency 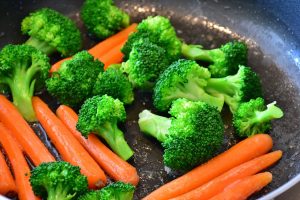 One group is people on vegetarian diet. Vegetarians tend not to get adequate B12 in their diet because this particular vitamin is most abundant in meat, fish, eggs and dairy products and really not very much available in vegetables. So, most vegetarians have to supplement with vitamin B12. Read here other articles concerning the importance of vitamins in the various functions of the body.

Also, seniors are at risk because digestive strength weakens with age and their ability to absorb B12 which is very bulky and large vitamin becomes compromised and eventually causes this deficiency. This puts senior people in such great risk. Anyone taking any medication, such as anti-acids or anti-inflammatories have a risk of having their digesting ability compromised.

When you are taking B12 it is absorbed or broken down to your stomach by the hydrochloric acid and the stomach makes a protein what is called the intrinsic factor which is attaches itself to the B12 molecule and carries this vitamin to the end of the small intestine which is absorbed into the liver where it becomes activated. If there is any compromise in the digestive strength this very bulky vitamin doesn’t get broken down, it doesn’t attach to the intrinsic factor and finally doesn’t get absorbed in the body.

The video below explains how Vitamin B12 gets absorbed by the system and the main reasons of deficiency due to limited absorption:


So, if you have any issues with regard to digestion, for example if you are addicted and you need digestive enzymes, or if you have to follow a restricted diet to digest well or having to eat extra amount of certain foods or non of other foods, these are indications that you’re probably not digesting well. Many veggies that are in a classically deficient B12, often times become vegetarians because they do not digest well. It’s important for us to stop and dig in to figure out how we can really maximize and optimize our digestion health.

One major cause of B12 deficiency which I was surprised you didn’t mention is alcoholism. I will assume this is due to alcohol damaging the illium and preventing adequate absorption. Additionally alcoholism generally goes hand in hand with poor diet/malnutrition which also accounts for the deficiency.

If you have any symptoms of chronic fatigue, low energy, tiredness, mood concerns like anxiety, depression or irritability, Alzheimer’s, Parkinson’s, cognitive function, memory, swollen tongue, cracks around the mouth, canker sores, burning feet, these are all classic indicators of a B12 deficiency. Also, neuropathathies, diabetic neuropathy, bell’s palsy, are often times associated with B12 deficiency.

In addition, B12 deficiency allows homocystein levels to rise. Homocystein is a risk factor for cardiovascular disease. When its levels rise then heart attacks as well as the production of plaque on your arteries increase. Interestingly, strokes neurological and psychological disorders like depression and anxiety are also associated with high homocystein level.

Vitamin B12 with is supporting cast in B6 and folic acid produces and manufactures neurotransmitters like serotonin and dopamine which are protected agents for our mood, that support mood health and protect us against anxiety and depression, Alzheimer’s and Parkinson’s, really severe conditions that degenerate the nerve tissue like multiple sclerosis and neuropathies. So B12 is our major protector for a nervous system but it also protects our cardiovascular system and that’s important to know that when you optimize your vitamin levels you are protecting your heart as well. B12 breaks down the whole homocystein along with the effects of folic acid and B6 into a very simple amino acid methionine.

B12 folic acid also increases the production of a product that fights the depression called SAMe (S-adenosylmethionine, pronounced “Sammy”) which has shown in many studies to actually be as effective as the western medicine antidepressant drugs. So B12 is a powerful tool for protecting our system and heart against stress.

How to Avoid B12 Deficiency

For years we had to inject ourselves with B12 to get our energy up. Recent studies have shown that some sublingual pathways absorber well as the shots of B12 which is amazing and therefore we can actually take this vitamin orally with the sublingual version of B12 folic acid and B6 and take that 4,000mgs of B12 for about a month and that in that period you just start feeling significantly better than 80,000 mgs a day thereafter to maintain the benefits.